Cell and Gene Therapy (CGT) is an exciting branch of medicine that is focused on regrowth, repair and replacement of damaged cells or tissues. The market in this groundbreaking scientific field is composed of three main approaches: 1) cell therapy/gene modified cell therapy, 2) gene therapy, and 3) tissue engineering. Since the 2010s, research in cell and gene therapies has advanced rapidly, particularly in Europe, the United States, South Korea, China and Japan.

Chimeric antigen receptor T-cell (CAR-T) therapy is a gene-modified cell therapy that has been approved by the United States Food and Drug Administration (FDA) to treat certain lymphomas in blood. The treatment involves collecting T cells from the cancer patient, modifying them in the laboratory so that they attack the cancer, expanding (increasing the number of) the modified cells, and infusing them back into the patient, where the cells fight the cancer.

Another example of innovative cell therapy is mesenchymal stem cell (MSC) therapy, in which cells collected from a donor’s bone marrow are cultured and transplanted into the patient. Experimental MSC therapies have shown promise in clinical trials for the treatment of various organ injuries, including those of the lung, spinal cord, and cartilage. Diseases that are difficult to treat, such as those of the central nervous or vascular systems, and newly emergent conditions such as acute respiratory distress syndrome (ARDS) in COVID-19, are also candidates for clinical trials using MSC therapy.

This exciting era of "living drugs" also brings complexities and challenges. This is especially true since the field of cell and gene therapies is in the early stages of development. Cell production and formulation processes are often performed in research laboratories, and typically include many labor-intensive tasks. An enormous amount of work is performed by hand.

Terumo Blood and Cell Technologies is one of the Terumo Group’s three companies. It is headquartered in Lakewood, Colorado, USA, where it was established in the 1960s. The company has a legacy of automating complex processes, and brought this expertise to cell and gene therapy. For years, the team has relentlessly developed, improved, and innovated its core blood and cell processing technologies.

Most notable among these are innovations in centrifugal blood separation technology using apheresis. In apheresis, a specific component of a donor’s or patient’s blood is collected while the non-collected components of the blood are returned to the donor or patient. The apheresis system can efficiently collect specific patient cell types. These cells can serve as biological raw material to initiate the process of autologous gene-modified cell therapies such as autologous CAR T-cell therapy.

Terumo Blood and Cell Technologies provides products and services that automate and improve efficiency throughout the cell therapy cycle. The company and its associates understand that enabling automation, reducing manual steps and implementing standard procedures is the key to success in this new, emerging field of medicine. The goal is to automate and standardize cell product manufacturing processes to solve the problems posed by manual workflows. The cycle includes cell collection at a hospital, manufacture of cellular product at a production facility, formulation/filling (termed "fill and finish") of bags with cellular product, freezing the product and transporting frozen product back to the hospital for administration to the patient. The centrifugal apheresis system can collect cells from the patient at the beginning of the cycle. The cell expansion system, introduced in 2011, can culture and expand cells for therapeutic use – the "expand" portion of the cycle. The cell processor can perform the "wash and concentrate" step. Most recently, the fill and finish system was released to the market. Following washing and concentration, this system automatically transfers and seals cells into bags with proper formulation to be frozen and later administered to patients. The company also provides sterile welding systems that are used extensively throughout the cell processing cycle to maintain a closed aseptic (never exposed to air) system. The data management systems that automatically record and document cell processing steps are also available.

By providing these systems that improve efficiency in workflows from cell collection all the way through treating the patient, the company advances toward automating the highly manual work of researching and creating new cell therapies.

Cell expansion is one of the most important steps within the above cell and gene therapy production cycle. Terumo Blood and Cell Technologies applied its expertise to develop the automated cell expansion system. During cell culture, this system uses a sterile disposable kit and maintains a consistent and controlled micro-environment for cells, by automating key processes such as feeding cells, removing waste, adding oxygen, and removing carbon dioxide. The bioreactor at the heart of the automated cell expansion system uses hollow-fiber (HF) semipermeable membrane technology. Each HF bioreactor (HFBR) contains 11,500 hollow fibers that hold cells during expansion. The fibers facilitate exchange of culture media, which is fluid that nurtures and perfuses cells. The membrane fibers are very small (inner lumen diameter of about 200 micrometers and wall thickness of only 50 micrometers), so they are well suited to efficiently remove toxic molecules and transport beneficial molecules. The semipermeable HF membranes create a two-compartment system that allows efficient and free exchange of small molecules, such as glucose and lactate, between compartments. The cells are confined to the intracapillary (IC) compartment for culture and expansion.

In the early 2000s, the company’s scientists and engineers recognized that the highly efficient molecular transport features of HFs could offer huge benefits for cell expansion in the regenerative medicine field. The approximately 21,000 square centimeters of surface area created by the hollow fibers is equivalent to the surface area of around 120 T-175 flasks used to expand the same quantity of cells manually. Put simply, HF technology enables a vast amount of cell expansion to be performed in a small space.

Scientists and engineers collaborate to achieve expansion of suspension cells

The cell expansion system can support expansion of both adherent and suspension cells. Adherent cells, such as mesenchymal stem cells (MSCs), adhere to the internal walls of the hollow fibers. Once attached, they begin to expand. Expansion conditions are ideal because the dual-compartment bioreactor performs continuous perfusion. Suspension cells do not attach to the HF wall; they grow and expand while suspended in media. The cells are cultured and expanded on the intracapillary side of the hollow fibers.

In early product development testing, scientists and engineers had difficulty keeping suspension cells inside the hollow fibers. Even with very low flow of perfusion media into the bioreactor, the suspension cells exited out. The team spent great time and energy to solve this problem. One day in the lab, a member of the Science group suggested a brilliant and simple solution: Observing that cells always escape from the media outlet end of a HF and never from the inlet end, the suggestion was "let’s simultaneously and continuously flow into both ends of the HF." This was immediately tested and found effective. Simultaneous flow into both ends of a HF is possible because the walls of the fiber are very permeable; perfusion media entering the ends of the fiber can escape by flowing through the wall of the fiber into the EC space. However, the suspension cells cannot cross the wall of the fiber, and with incoming flow at the ends of the fibers, cannot exit, and remain as desired. Final formulation and cryopreservation of the cell product to prepare it for storage, transport and ultimate transfusion is another critical step in cell therapy manufacturing. At this late stage of manufacturing, the cells have gone through a tedious and expensive manufacturing process. Most importantly, the patient has been waiting throughout. Maintaining cell sterility, functionality and viability through the final “fill and finish” step is critical, and any failure is costly. Although earlier steps of the manufacturing process are often automated, this step can be slow, partly due to reliance on manual methods. Manual fill and finish methods often lack necessary process controls. Lack of rigor can negatively impact cells at the point of thawing and transfusion to the patient.

The fill and finish system is designed to automate and control the final formulation and filling step. Its flexibility and electronic data capture ensure process control and cGMP compliance. The system includes a sterile, single-use disposable kit with cryopreservation-friendly product bags. The disposable set contains three product bags and a quality control bag for post-formulation testing. On the device, the chiller plate and mixing arm ensure that the cell suspension and cryoprotectant media are mixed in appropriate volumes, maintained at the set temperature within tolerance limits, and remain homogenous before being placed in product bags. 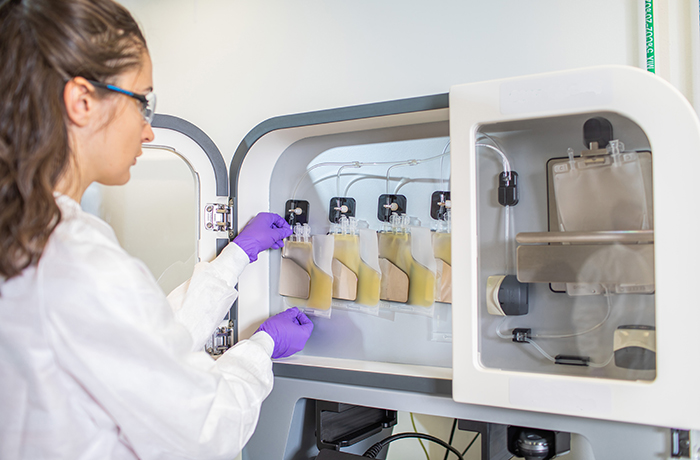 The fill and finish system

The emerging and rapidly growing field of cell and gene therapy presents nearly unlimited opportunity for the company to apply its long tradition of innovating new products and services to further advance healthcare. Applying current technologies and expertise to solving customer problems within these new markets is important. Expanding these technologies and augmenting the company’s cell therapy product portfolio to solve customer problems is key. The goal is to refine, simplify, and automate the cell manufacturing cycle from end to end. Achieving this goal will ensure that Terumo’s growth will mirror the explosive growth of the cell and gene therapy market.

"Hybrid" Graft Technologies to Support the Evolution of Aortic Treatment

ICT Healthcare Evolution and the State of Pharmaceutical Infusion Systems

Creating Core Technologies to Contribute into the Future

Technology that Meets Patients’ Medication Needs with Safety and Certainty

Intervention through the Wrist Thirty Years of Evolution; More to Come