The regulatory approval status and availability of Terumo Group products differs by country and region. You can receive product and service information from the Terumo Group company operating in the country or region where you will use the products or services.

North America
Terumo has been doing business in North America for nearly half a century. Terumo America Inc. (now Terumo Americas Holdings) was founded in 1971, and since then the Terumo business has grown much larger and more diverse. The Blood Management Company and the Neurovascular and Cardiovascular divisions of Terumo all now have their headquarters in North America, which is not only a center of Terumo research and development and production, but also the largest market that Terumo serves outside Japan, accounting for around 30% of total Terumo Group sales.
Headquartered on the East Coast in New Jersey, Terumo Medical Corporation performs North American sales of Terumo TIS Business interventional products and the hospital products of the General Hospital Company. Terumo Cardiovascular Systems Corporation, headquartered in Michigan, handles the research, development, and production of Cardiovascular Business products.
Headquartered on the West Coast in California, MicroVention Inc. develops, manufactures, and sells the neurovascular treatment devices of the Neurovascular Business. In recent years, North America has also become a Terumo center of device innovation, with the addition to the Terumo Group of Kalila Medical, a vascular closure device manufacturer; and of Bolton Medical , a Florida-based developer and manufacturer of stent grafts in the Vascular Graft business.
Terumo BCT and our Blood Management company are headquartered in the Western state of Colorado. The Blood Management business contributes to healthcare by providing products and services that sustain blood transfusions, blood and cell therapies, and related care in over 130 countries and regions globally. 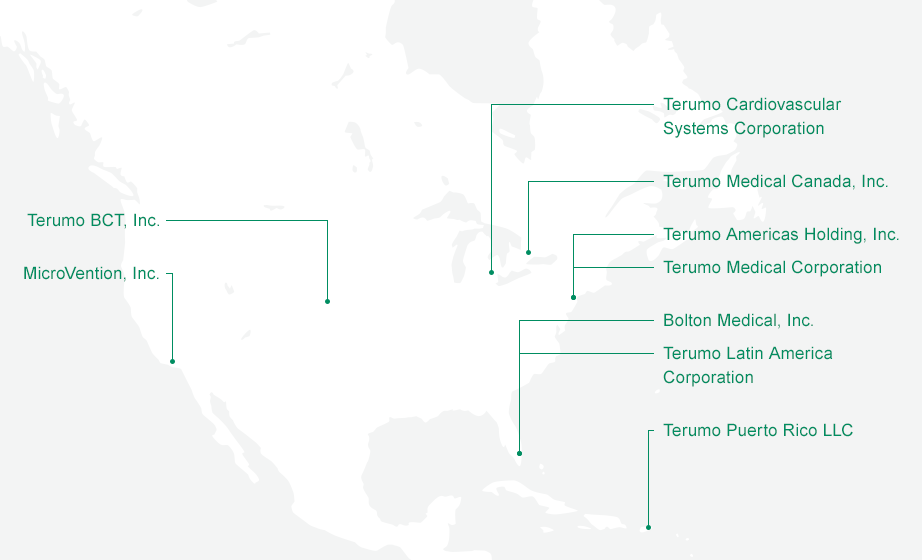 Click here for information on products manufactured by Terumo Corporation (legal manufacturer) in the EU and Australia, according to the respective regulations.